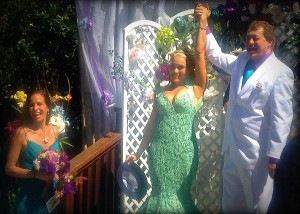 This original poem was inspired by Christy & Charles Muir.  I was honored to be sister-priestess-bridesmaid at their wedding on March 29th, 2015 with about 80 members of their tantra family. As the creator of the event where they met, Tantra-Palooza on 12-12-12, I wanted to immortalize the story of love at first sight. Enjoy!

When the Master Meets his Muse.

The last time she made a vow
Was before she wore the skin she’s in.
She dedicated her voice to serve the goddess.
For she’s the Muse who sings when she prays.

And he’s the master who hears with his heart
And listens with his lips.
Lifetimes ago, he vowed to make love
For the sake of all sentient beings.

And today, by the power of all that is holy,
these two vow to become one
in Liberation, Salvation, Surrender and Bliss.

What magic made their lives cross?

She showed up for a guitar gig in purgatory.
As we all know: The world of form is ending.
It’s been pre-ordained, and if we’re going to die
We might as well feast and go down holding hands.
Says he, who agreed to awaken the sacred serpent

So the temple fills with seekers, (soon to be found)
She strums a soulful invocation
Unwittingly unearthing his timeless devotion.

For when the master meets his muse:

Reality is stripped naked from it’s veils
all of existence is revealed as a frequency
beyond matter, yearning to be realized.
For heaven and hell are not as they seem…
And with this brief time we have on earth
They chose to dance together in dharma
Rediscovering the embodiment of rapture
And rewriting outdated scripture.
–KamalaDevi 3/29/15 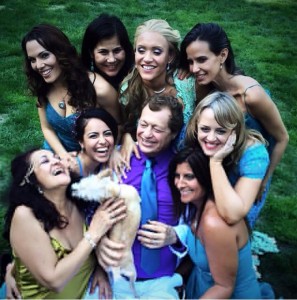