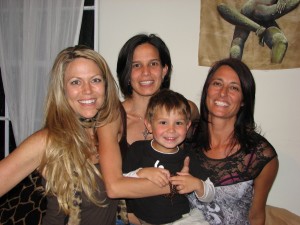 In this photo, Devin, is sandwiched between my girlfriend Viraja who I started dating the very night that I met my husband ten years ago, and  Cheri who I’ve also been on/off lovers with for over 9 years. And yes, through the years we have ALL been romantically connected with full knowledge and consent of each other. When I was ready to conceive, we even had a visionary conversations about raising children together in a poly family household.  Viraja got pregnant 4 months before me and though we never moved in together, we are re-defining family throughout our pregnancy and years of non-traditional holiday gatherings.

When my 5 year old son is old enough to ask about relationships, I’ll have to sit him down and expalin that there exists a thing called “monogamy.” He may be confused about why so many mommies and daddies would chose to have only one special lover, when our home is so full of special aunties and uncles who are always giving him attention, gifts and cuddles.  Afterall, Polyamory is all he has ever known.

Yet, it’s important to note that my son’s childhood is not entirely defined by how his parents chose to love.  His poly family may not be ‘normal,’ but by every standard, he is a bright, healthy, happy boy.

Our family life looks a lot more ordinary than most people would expect. And then there are times when our poly family becomes Extra-ordinary. Here is a personal account of a recent crisis which illustrates the benefits of Polyamory as a family value.

Devin was away at a sleep over with his best friend while my lovers gathered to watch episode 2 of our Polyamory Docu-series when our Michael got an urgent text that Devin was hurt and being transported to the children’s hospital. Michael and I rushed into the Emergency while my girlfriend Roxanne, and her boyfriend Daniel stayed in the waiting room for emotional support.

When we arrived, Devin was lying in little bed with bandages around his head laying next to his best friend who was also in the accident. The boys mother was sitting between the two little boys who both still had blood on their hands and feet. Devin calmly retold the story of how he was sleeping under a bookshelf which came loose and fell on his head. He said the best part was getting to ride in an ambulance!

We were relieved when Devin’s best friend got sent home with 11 stitches. The surgeon had Devin stay because he had a more severe head injury which left a deep gash by his hairline and a visible fracture to the skull.  Over the next 24 hours our family went through Cat scans, pain killers, tetanus shots, antibiotics and tests from 10 different specialists concluding with plastic surgery.

Michael and I took turns holding Devin’s hand, while the other parent stepped out for fresh air and emotional support. Our pod brought us food and supplies from home so we could sleep in a small portable bed listening to the monitors’ steady beat, while the nurses come in every few hours with a flashlight to make sure Devin’s eyes were still dilating. The night was only made easier by the tender massage of Roxanne’s loving hands, and Daniel’s reassuring words. In the daylight Jen and Tahl came by to feed and love us, while other lovers such as Viraja offered light work from a distance.

There have been many times in my life when I have been frustrated for not having more of a village to help raise my child, but my frustration has been forgiven in the last two weeks of Devin’s recovery. I am also grateful to all the loving adults who  have been offering support, prayers, get well gifts, and empathy.

We have been abundant enough to help to our monogamous neighbors and their boy who didn’t have as much help through the crisis. They said they could’t believe how calm, brave, and well adjusted he was in the hospital. She suspects that because of polyamory he is not overly attached to one parent.

This extreme example is just one of many where my poly pod is re-defining old concepts of family (now a poly family) and creating sustainable paradigms of love. Despite people’s projections, it is not all about sex, but we are held together by deeper values of love, honesty and community. 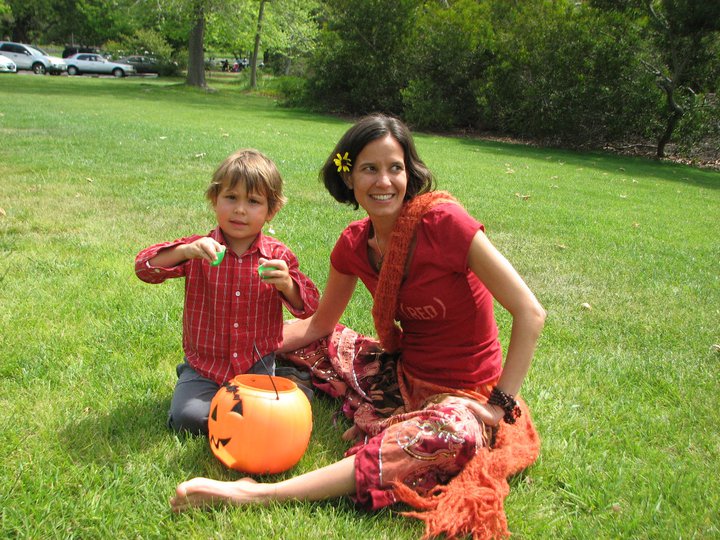 Of course, I understand that much of the support we received during this emergency could have been gotten by friends and family that we did not have romantic relationships with. And yet, there is something profoundly healing and integrated about surrounding myself with people with whom I share all aspects of my life. Further, I have found that one of the best ways to heal and recover from trauma is with body empathy, touch and sensuality. This type of love is a trade off however, as I open my heart to loving more people, I also open myself to feeling their sorrow, their hurts, their longing, their humanity.

In closing I’d like to leave you with this thought:  If most children can adapt to having one parent move out due to divorce, why wouldn’t my child acclimate to having more parents move in due to love?

For more personal blogs and letters from her heart, please subscribe to Kamala Devi’s monthly Newsletter and for a limited time get a free gift!  www.KamalaDevi.com

If you’d like to join Kamala Devi and the San Diego polyamory family for a fun weekend retreat to explore firsthand how they do polyamory, check out Poly Palooza: Top 10 reasons to go to a 4-day festival for free lovers! or go to Poly Palooza: The Weekend Festival for Free Lovers.