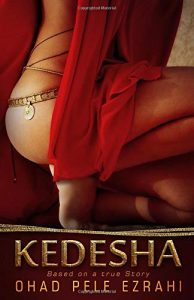 Some works of fiction rewrite history — not only because the vivid events take place in the past, but because the bold choices of the characters shine a new light on humanity’s future. This is one such book. A sacred sexual transmission transcends the pages of Kedesha. Reading this story has indelibly touched my soul.
KamalaDevi McClure, author of Sacred Slut Sutras
BUY YOUR COPY NOW!

Tara is a young American who travels to Jerusalem, where she meets Yoni, a handsome Israeli who is a sexual shaman. Yoni and his wife Hagar take Tara on journeys of deep self-revelation, using ancient rituals and sacred sexuality, that link her soul to the ancient Temple of Astarte, which stood in Jerusalem before the monotheistic revolution of the 7th century BC.

A priest of Yahweh is pitted against the ancient temple priestesses

In a parallel story, a sexually frustrated priest of Yahweh vows to destroy Astarte’s temple and her sexual rites. An ancient sacred scroll surfaces containing orders to wipe out any form of worship other than that of Yahweh.

Who wrote this early tome that so deeply influenced the history of religion and of the world? How did the Love Goddess priestesses respond to attempts to destroy their path? With magical vibrations, the author weaves together ancient history and modern fiction and sweeps the reader into secret chambers where sexuality and sacredness meet in awe. This book will change the way you see the history of the world, religion, culture, and sexuality.

My personal life journey as a young man seeking truth in Buddhism, shamanism, and eventually my own ancestral world of Kabbala led me to write this book. In my 20’s I became a rabbi and devoted my life to God through this path. My spiritual nature did not let me stop at the point of accepting all that was given to me as truth. I undertook my own research, and what I learned about the origins of religion, about the origins of what today is known as Judaism, led me to understand two major things. One is the sacredness of sexuality and the way it is twisted in the religious world so as to block people from waking up to their true sacred nature. The second is the line of historical conspiracies, some of them documented in the scriptures, yet unspoken, that led to the creation of the three Abrahamic religions (Judaism, Christianity, and Islam). They took over the world and destroyed a lot of its wild, ancient, shamanic beauty. My path brought me to a place where I am now sharing my gifts of sexual shamanism all around Earth. The calling was strong: to expose to the masses part of what I have revealed – to make this unbelievable story known, not simply as an academic article (many of them have been written about the facts that are portrayed in Kedesha), but to the readers’ imagination, which can feel and see further than the thinking mind.